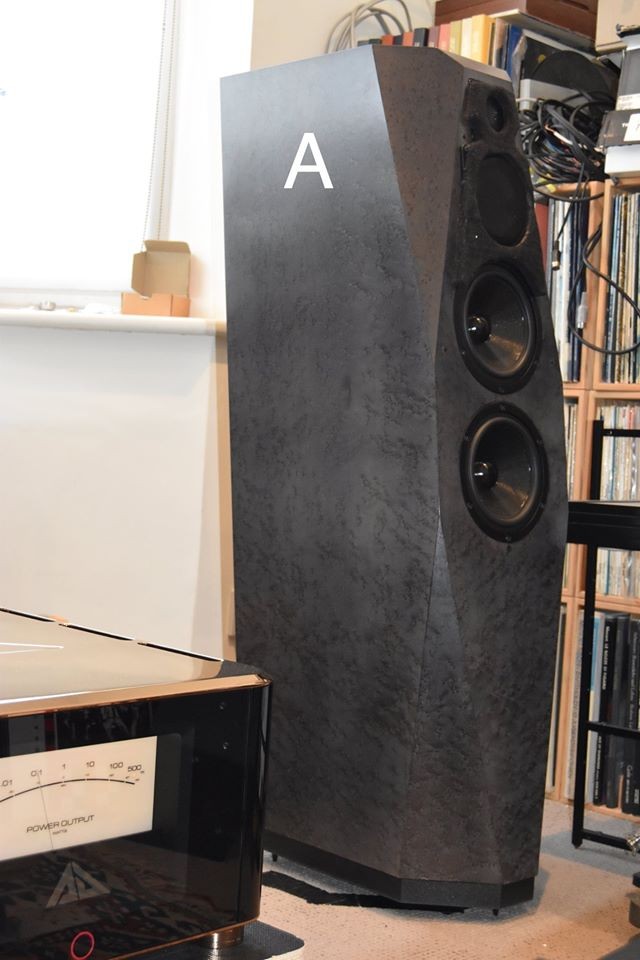 The PM3s left a gaping hole in my system one which I thought would be hard, if not impossible, to fill. Yet the PM2s arrived and after some re-positioning took over where the 3’s left off. In my room I found that the PM2s preferred to be both slightly closer together and closer to the listening position in order to achieve the same sense of scale and presence enjoyed with the PM3s.

The PM2 are of course smaller and therefore physically less imposing. The 2x  9” Nomex/Kevlar Composite Cone Woofers of the PM3 making way for 2x 7.5” woofers in the PM2. Tweeter and mid range units remain the same.

From the off there was clearly a family sound, these had clearly been voiced by the same ear albeit as you’ll see later with slightly different focus.

The PM2 now driven by the solitary Analog Domain M75D Integrated amplifier had no difficulty in filling my smallish room (4x 5m) with plenty of volume; Pace, Rhythm and Timing all there in abundance as before.

I’m tempted to say that in so many ways they are remarkably similar. The top and mid range with the same openness and expression, the same presence and detail, the same texture and body. Yet the overall impression is slightly more relaxed, slightly softer and more forgiving. Where before the music was presented in micro detail, now a little less so. Almost like reading a book word by word rather than sentence by sentence. The sense is the same however you may occasionally miss a little nuance but perhaps you get a better overall understanding!

As I mentioned above one gets the feeling that PM2 will be more forgiving of what goes before them yet capable of benefiting from the best ancillaries you can afford.

Each cable change was clearly identified and revealed by the PM2. I first tried different power cords; TQ Black, Vertere Pulse HB and Entreq Olympus. With each change the sense of ease and effortlessness increased, the speed improved, the dynamics improved. The weight and depth  of the bass improved. At the top each had more air and space than the other progressively more revealing and detailed more nuanced and musical.

By the end and moving to a full Entreq Atlantis/Olympus loom of speaker cables and interconnects as well as power cables proved just how revealing the PM2s can be.

The sound now hanging in the air ethereal like completely outside the box with ease and yet with such body and presence to make the sound palpable.

The Bass on the PM2 is good, very good, fast and dynamic and well extended. Not the thunderous bass achieved by the PM3 but still there detailed and musical.

Like the other PM series the PM2 are holistic and seamless with an effortless transparency that takes you into the recording yet remaining musical and engaging. Whatever the album you feel a deeper connection with the music, the artist and his/ her intentions, they transport you into the studio or venue.

I could happily live with a pair of PM2 and if I had heard these first perhaps I would have considered them an ideal demo speaker. As it stands the PM3 are on order. Sometimes it is a question of more is more.

No other information about this author.