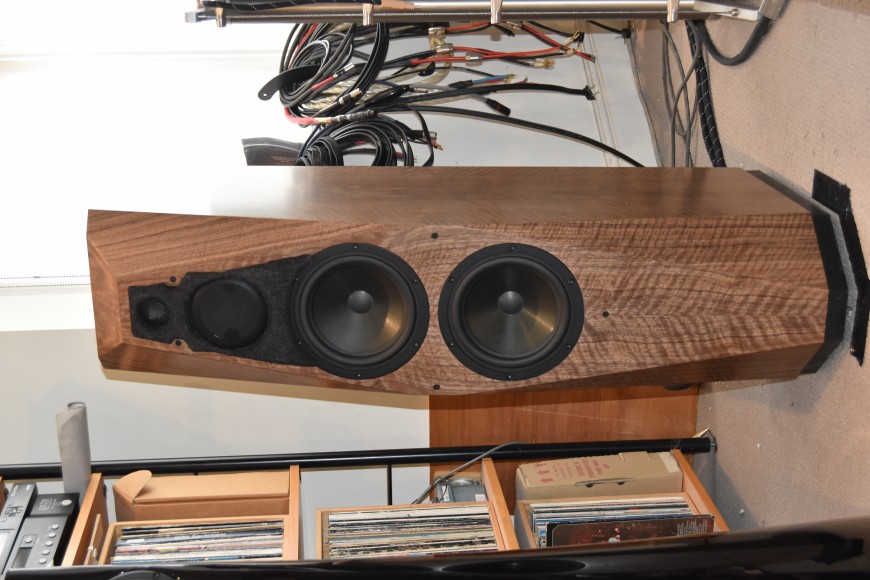 Before the PM3’s were prized out of my clutches I did manage to play them with a few different amplifier/ pre-amplifier/ cd player combinations, to get a broader impression of what they were bringing to the party.

First I replaced the Analog Domain M75D and P combination for the monster Analog Domain Artemis mono-blocks. Neil Patel had said that the PM3s are capable of absorbing and delivering unparalleled spl and dynamics. What better amps then to prove this, at 2000wpc into 4 Ohm! These were in turn fed by the Analog Domain M75 pre-amp and T+A DPD 3000HV CD player.

My how right he is, I described previously how the PM3’s take you into the recording and bring you as close to the performers/ stage as you dare (how loud can you play).  Now driven by the Artemis and listening to Runaway Lover on Madona’s Music album; the driving synth and thumping bass line take you deep into the recording as if on a roller coaster letting you experience every twist, turn and bump yet following every nuance and detail. The more I listen to this album the more I felt that Neil Patel must have used it to voice and benchmark these speakers.

Those much sought after musical attributes: Pace Rhythm and Timing when describing a music system have never been better portrayed than by the Analog Domain Artemis driving the Avalon PM3. The pre-amp driving the monos like a bat out of hell fast fast fast, leaving you on the edge of your seat and on the limit of what you thought was achievable, with an almost overwhelming pace that simply leaves you out of breath.

However I can understand how some may find this too much, too overwhelming and therefore decide to try and tame things a little.

With this in mind I Switched the Analog Domain pre amp for the mighty VTL 7.5. This immediately brought a certain amount of tranquility to proceedings. Now the edges were a little more blurred, softer and a little slower. Gone was that hypersonic break neck speed. The roller coaster rails were now covered in thin felt, slightly softening the edges. The VTL perhaps allowing for a little more time for sightseeing whilst on the musical journey through the album. The immediacy replaced by a more gentle valve like quality. The bass too now a little less pronounced, though still strong and powerful and very musical.

Switching between DACs; Analog Domain DAC1 vs the T+A at first made nearly no perceptible difference. Strange? On reflection perhaps not! I had been playing loud, very loud and clearly my ears had gone into lockdown. Turning the volume down and resting a while, revealed the differences between the two DAC’s much more clearly. As expected the DAC1 has the typical AD drive, speed and openness nicely nuanced and detailed. The cymbals sparkling with metallic sheen and the bass driven with weight and texture. The T+A then added a little more air between the instruments, without quite the speed and authority, yet slightly softer and perhaps a little more rounded. Both DACs however were engaging and musical rooting you to your seat.

What is clear from my listenings is that Avalon’s Performance Monitor Series are just that; they perform and monitor, they are as revealing and transparent, fast and furious or soft and cuddly as the equipment you partner them with.

Some things about the PM series do not change however; their coherence, integrity, holistic presentation; their ability to disappear and leave you with a believable tangible soundstage. All in all these are really rewarding loudspeakers.

No other information about this author.